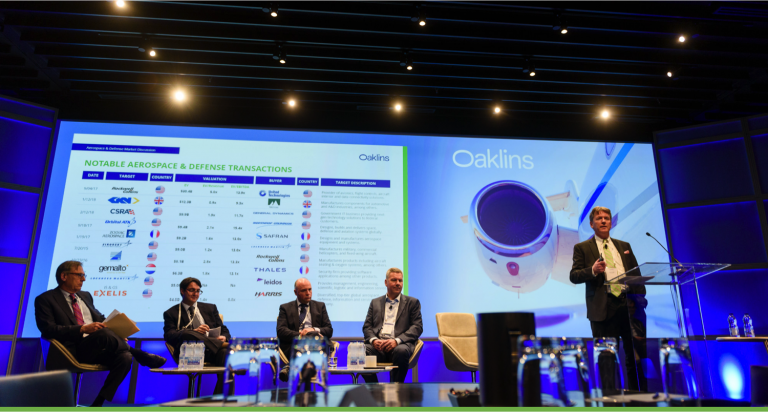 Montreal, Canada (April 26 – 28, 2018) – Over 100 Oaklins M&A professionals traveled to Montreal to attend the Aerospace & Defense (A&D) event, “How global trade tensions are creating opportunities.” Key manufacturers and investors were invited to share their knowledge of the aerospace industry and discuss challenges, advancements and growth opportunities in the sector.

Host city, Montreal, is home to a large and supportive aerospace ecosystem. Suzanne Benoît, President of Aéro Montréal, acknowledged the main factors, both public and private, supporting the current strengths and future potential of the aerospace industry.

Gilles Labbé is President, CEO and Director of Montreal based Héroux-Devtek, the third largest landing gear company in the world. He provided insight into the company’s expanding success through a careful strategy of mergers, acquisitions and divestitures to become a full-service provider to both the commercial and military markets.

Cliff Bayer, Head of Aerospace & Defense at RBC Capital Markets, expressed an upbeat forecast for the future of M&A in the aerospace market, saying “universal optimism” is defining the sector. Positive trends on the commercial side, a rise in passenger traffic, growth in the Asian commercial market and an early stage upturn in defense spending in the US are the main indicators.

Stephen Perry, Head of A&D, Oaklins: “The aerospace and defense industry is undergoing dramatic structural change. These include changing technologies, obsolete business models and geo-political tensions. However, it´s a great time to be a seller.”

The afternoon continued with presentations from representatives of the leading mid-market private equity firms Audax, CDPQ, Novacap and The Riverside Company who shared their portfolios, plans and discussed opportunities in an exclusive summit with our members.

Login to Janes Capital Partners
Reset Password
Enter the username or e-mail you used in your profile. A password reset link will be sent to you by email.
Already have an account? Login